1. Grave Markers of the Ancient Elite 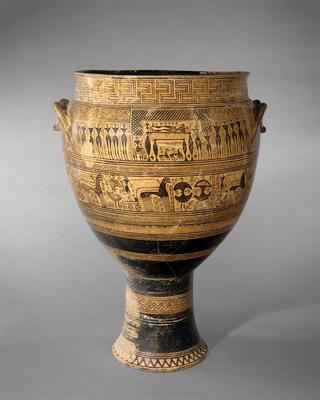 Grave Markers of the Ancient Elite

Grave markers, even in our current era, leave a trace of where the deceased once stood and create a memory of their everlasting presence. In early Greek art, beginning around 800 B.C., a rising class of wealthy elites also aimed to create monuments that would stand in their place upon death.[1] Spanning from the Geometric to the Archaic period, grave markers became increasingly more elaborate and monumental. Although many stylistic details did not fluctuate, there was a beginning interest in human naturalism as the viewer can receive a sense of the individual that once lived.

A newly emerging class of elites enjoyed showcasing their wealth by equating themselves with material objects.[2] As seen in previous cultures, funerary objects are a fitting way to display social status and win good favor of the gods. During the Geometric period, kraters, amphoras and other vessels became a way for individuals to assert an everlasting presence of their ranking in society.[3] We can identify these vessels beyond practical use due to their size and the narratives depicted on their registers. Many of these vases clearly depicted funerary scenes and rituals in their registers to honor the deceased. Funerary ceremonies were an important part of the burial process. An ancient funeral would have consisted of three days of ritual.[4] As seen the registers of monumental kraters, the dead were mourned and properly adorned, followed by a ceremonial procession. The Dipylon Amphora show this type of funeral procession in it’s most prominent, middle register. The people and animals rendered in the registers are captured in their most basic form. The upper body is triangular shape accompanied by a geometric head and long cylindrical legs. Geometric styled patterning and animal motifs accompanied the funeral narratives and filled any empty spaces. Large decorative patterns, such as meanders, shapes, solid lines and linear design, covered the empty spaces in an organized manner.[5]

Throughout the Geometric period, funerary vessels became increasingly more elaborate in decoration and grow in size. As these vases were no longer for practical uses but functioned as a representation of a human. The size of the vessel connected with the importance of the individual socially and economically. Thus the most monumental sized vessels were most often reserved for the elite class. Like social status, the shape and size of the vase correlated with its function. During this period cremation was utilized along side inhumation, thus the function of the grave vessel was multifunctional.[6] Large amphoras and kraters were typically used solely as grave markers, while amphorae were used as vessels to hold ashes of the cremated body.[7] The shape of the vessel also correlates with gender differences. Amphoras usually correlate with females while kraters would have been associated with males.[8] Although these elements appear to be universal during the time period, the differences speak to the deceased individual. When looking at Geometric funerary vessel, the viewer may not see the face or the body, but it represents the person that was once here. The viewer receives an idea of the status and gender of the person and how their body was laid to rest.

The Geometric period closes around 700 B.C. and ushers in a new type of grave markers in the Archaic era. This period shows an evolution of linear and geometric humans and shapes and maturity in human naturalism. The most notable change in regards to grave markers, is the use of free standing sculpture instead of pottery. Well- to-do Athenian elites often commissioned these funerary markers composed of the marble.[9] The life-sized sculptures littered ancient grave sites and typically came in two forms: the kouros and the kore. Similar to the Geometric vessels, the two forms differed in gender. The kouros are young male nudes while the kore are clothed maidens.[10] The kouros are portrayed in a frontal pose, arms and hands lay tightly connected to the body as one leg moves forward. The face shows dramatic human features, like the almond eyes that protrude from the sockets and full checks that result from an unnatural smile. They are strictly symmetrical and stiff throughout their stance. The kore also depict the same frontal and rigid form, except shown in column like drapery that falls unnaturally down their body. Although they appear far from life like, they represent the beginning curiosity of capturing human naturalism.[11] As grave markers, these statues help to better understand the individuals of Archaic Greece. Unlike the Geometric amphoras and kraters, the free standing sculpture turns the fact of death to face the viewer.[12]

Although similar in form, the kouros and kore carry discrete distinctions among them. One of those distinctions is in the inscriptions that were carved into some of the sculpture. The description gives the viewer an idea of what was lost in death, along with the name of the deceased and the sculpture.[13] Many of these elites had pride in their wealth, achievements and act of bravery. An example of an inscription states: “Stay and mourn the marker of dead Kroisos whom raging Ares destroyed once on a day in the front ranks.”[14] Although the viewer is gazing at a perfected and ideal body, the reality of a fallen wounded warrior comes to mind. Along with inscriptions some kori hold objects in their hands. Symbolizing a story of the deceased or a symbol of the god they are offering upon death further creating an individualization to these markers.[15]

The grave markers created during the Geometric through the Archaic era, outlived those who have died and the families that have erected them. Although they do no stand in their original context they still capture the individual in its own space and time, creating an everlasting presences of the ancient elite.

2 Department of Greek and Roman Art.Heilbrunn Timeline of Art History: The Metropolitan Museum of Art, http://www.metmuseum.org/toah/hd/grlg/hd_grlg.htm.

9 Department of Greek and Roman Art.Heilbrunn Timeline of Art History: The Metropolitan Museum of Art, http://www.metmuseum.org/toah/hd/grlg/hd_grlg.htm.