1. Art Worth Fighting For: Repatriation in Late Classical Greek Art 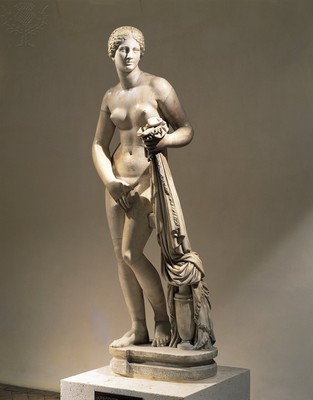 Art Worth Fighting For

On a Turkish peninsula, stretching out into the waters where the Aegean meets the Mediterranean, are the ruins of the ancient settlement of Knidos. The location itself is breathtaking; with rocky outcroppings cloaked in green grass and the remarkably clear blues of the seas. While the architectural ruins of the city are rich with history, the pride and joy of Knidos is a woman.[1] Created by Praxiteles in 350 BCE, the Aphrodite of Knidos is credited as the first life-size female nude of western art. At the time of her creation, she was considered by some to be the “best statue in the world.” Pseudo-Lucien, in his Amores, recounts the reactions of his friends upon first seeing the Aphrodite in her temple in Knidos: “So skillful was the sculptor that the hard stone appears as flesh and bone in every limb. Kharikles indeed ran up to the statue and kissed it on the lips shouting ‘Happiest of the gods was Ares though bound in fetters for her sake!’”[2] She is Knidos’ claim to fame, yet she isn’t there. In the beautiful coastal site of Knidos, the only sculpture of Aphrodite you can find is a ten-inch plaster replica lined up next to the coffee mugs in the gift shop. The actual statue is lost, though its best ancient copy now resides in the museums of the Vatican. This statue is not, however, the only one of its kind separated from its origins. This exhibition focuses on ten objects under contested ownership that were created in or around the Late Classical Period in Ancient Greece. Many artifacts of antiquity are being called home, while museums and private collectors all across the globe cling to their legal rights to keep them safe in their possession. So who, if anyone, is right? Is an overarching recall truly the best course of action? Most importantly, what is it about these objects that make them worth fighting for?

Another statue of a goddess, once also believed to be Aphrodite, was returned by the American Getty museum to the Italian government in March of 2011.[3] Often called the “Getty Goddess,” the statue was a crowning jewel for the museum that once held her. So why send her back to Italy? The case of the Getty Goddess was not a smooth one. Every account of the story pulls together the drama of international law, scandal, and buried secrets. Jason Felch and Ralph Frammolino attack “the world’s richest museum” in their book, Chasing Aphrodite. In the book, they tell the story of the Getty museum and the many artifacts it held in contested ownership, most importantly, the Getty Goddess: “The goddess held an allure so strong that a museum risked everything to own her; a nation rose up to demand her return; archaeologists, private investigators, and journalists scoured the globe for her origins; and a curator ruined herself trying to keep her.”[4] The Getty was not the only museum under question at the time. Turkey, Greece, and Italy have put many museums under scrutiny over their collections of antiquities. The Metropolitan Museum of Art, the Boston Museum of Fine Arts, the British Museum, and many others have faced the demands for the repatriation of their masterpieces. In the light of these controversies, many artifacts have been returned.[5]

The museums, however, have not gone silently into a corner as if chastised. They too are making stands to keep their treasures—and they may be right. Though some antiquities may indeed be the result of theft, looting, or other suspicious acquisitions, many of these objects were legally obtained—either purchased or given. It is said, for example, that the Ottoman Turks saw no need for an erotic, pagan statue and voluntarily sent away all copies of the Aphrodite of Knidos. It is only in recent history that the Turkish government has begun crying out for their return. Moreover, the argument is often presented that the artifacts themselves may be much safer in the museums that now hold them instead of in their often-unstable countries of origin. Though this argument most often refers to artifacts from Mesopotamia and its surroundings, the precarious political-economic climate of Greece and the proximity of Turkey to the tumultuous Syria extend this consideration to Greek antiquities. The murder of Khaled al-Asaad earlier this year tragically illustrates this defense. Asaad was a curator of the ancient city of Palmyra in Syria. Isis, the radical terrorist group, killed him after a month of interrogation over the location of hidden Palmyra artifacts. [6] Asaad died as a noble man, successfully protecting his country’s heritage. His death again rose the question: wouldn’t these artifacts be better off kept far away from such war-torn countries? Perhaps more importantly, however, his death poses another familiar question: what is it about an old, dusty object that moves people to such extremes? What makes a statue a matter of life and death?

As a viewer, as a recipient of our world’s heritage, I hope this will be your primary question you consider as you view these objects. You may well ask yourself which side of the repatriation debate is right. You may consider whether you would prefer to visit the Aphrodite in her native city of Knidos, surrounded by the vast expanse of the seas, or safely tucked away in the museums of the Vatican. You may recoil at the history of suspicious acquisitions by the affluent, Californian Getty museum, or perhaps you will celebrate with your favorite museum where you can still happily walk its galleries and soak up the heritage that has so importantly contributed to our society today. Maybe you will remember the fall of Palmyra and rejoice that so many other ancient cities still stand protected. Above all, however, I ask you to look at the graceful curves of the Aphrodite of Knidos, the regal power of the Getty Goddess, the downcast eyes of the Weary Herakles, the sensuous drapery on the marbles from the Parthenon, the smooth modeling of the bronze Apollo Sauroktonos and wonder what you would do to protect or possess such a work of art.