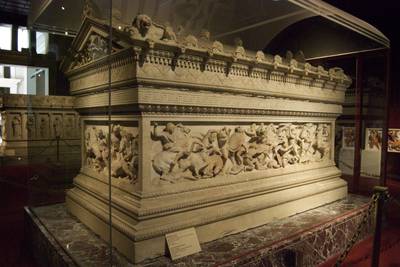 While many countries adamantly lobby for the return of their national treasures, Turkey is widely considered to have the most extreme repatriation demands.[1] While many people understand Turkey’s desire for the return of its treasures, there are still a few questionable aspects of Turkey’s campaign. One of the most glaring questions is Turkey’s hypocrisy, specifically on the subject of the Alexander Sarcophagus.

The crux of Turkey’s argument is on legal loopholes in the systems that allowed foreign museums to acquire Turkish property in the first place. The first loophole is that Turkey passed a law in 1884 forbidding the removal of Turkish artifacts to foreign soil. The law was never strictly enforced and many objects have been loaned out or sold since then. The Turkish government is now saying that this preexisting law nullifies all agreements and that the expatriated objects are therefore stolen. The second argument is similar: most of the archeological finds removed before 1884 were moved with a firman, or Ottoman permit, now declared to be invalid by the Turkish government.[2] On these two legal questions, many museums are being called out as thieves.

All of this effort brings up the question: will Turkey, likewise, be returning some of its museums’ treasures to the countries of their origin? The most controversial object in this discussion is the Alexander Sarcophagus. The sarcophagus was originally discovered in Lebanon, in the ancient city of Sidon. It was originally believed to hold the body of Alexander the Great but has since been identified as the final resting place of Abdalonymus, a king of Sidon.[3] It was discovered in 1877 along with seventeen other sarcophagi. The Ottoman sultan of the time, Abdul Hamid II demanded that the Alexander Sarcophagus be brought to Istanbul.[4] Today it resides in the Istanbul Archaeological Museum as one of the museum’s most valued artifacts.

The sarcophagus is remarkable in that it holds the only known depiction of Alexander the Great created during his lifetime. It is covered on all four sides with sculptural reliefs of the Persians and Macedonians. The scenes on two of the sides are believed to depict the Battle of Issus (333 BCE), where Alexander the Great of Macedonia conquered Darius III of Persia. The scenes on the other two sides depict the enemy armies working together in a series of hunts. The relief is carved deeply, allowing for complex overlapping of figures in the dramatic scenes.[5] Both leaders (as well as their respective armies) are shown with strength and dignity. Indeed, in the hunting scenes, they are shown as cooperative equals.[6]

While Turkey may advocate for the return of expatriated artifacts, it still clings tightly to this rare and beautiful example of how the later Greeks understood war. One can hope that the respect and care shown in this narrative object might similarly be paid to the controversy surrounding its ownership, and the ownership of the many other objects in this debate.