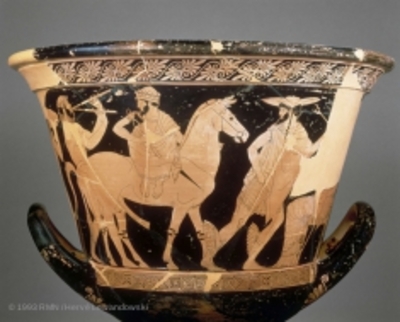 The red figure calyx krater is representation of4th and 5th century BCE Greek vessels. A particularly beautiful example is the early 5th century BCE Attic red figure calyx krater by the Cleophrades Painter, currently located at the Louvre.[1] This Attic is generously adorned with figures encircling the ceramic that tells a story of a procession. The calyx krater has a wide foot, a short stem, and cupped body with two low rounded handles extending to the sides. The body of the vessel is wide and cylindrical with a slight flair at the top and a lip. It measures 42 centimeters in height and 49 in diameter.[2] The red figure style is on a black background and replaced the earlier black figure style entirely.[3] This prominent pottery medium was developed in Athens, though most came from the Region of Attica. Red figure is a more detail oriented style then black figure, where the original red clay shows through and the details are added in black glaze.

The Cleophrades Painter was prolific in Attic pottery and signed a number of his works. He is credited with exceptional drawing skills that gave a sculptural illusion to his figures. The Greeks are known for their interest in the human body and motion and its representation in sculpture, here we see this fascination in painting. The Cleophrades Painter is possibly the first to portray a figural narrative that continues around the vase uninterrupted. This is one way to identify an ancient artist, through their style of iconography and depiction of narratives. Calyx kraters could hold any variety of themes, this one in particular shows Hephaestus’ return to Olympus in a highly narrative fashion.[4] In this mythical representation Hephaestus is accompanied by a Dionysian procession, complete with a mule, satyrs and several gods. Hephaestus can be found sitting on the mule in the center of one side. Just to the right we can see Hera seated on a throne, her legs bound. To the left of Hera, Hermes looks back at Hephaestus. Dionysus, being the god of wine and pleasure is drunk and being helped along, he appears on the opposite side. Dionysus was the only god who could convince Hephaestus to free Hera from the rigged throne and return to Olympus as one of the gods.[5]

There are several characters in this mythological narrative that we can identify by symbols or associated objects that sets them apart from a generic type. Hephaestus rides the mule because of his lame foot that he received when thrown from Olympus by Hera. He also carries his tongs suggesting he is the blacksmithing god. These elements are universal in Greek iconography and help us to identify him despite his appearance. Another universal symbol are Hermes’ winged boots. We know he is a messenger god because of this attribute which allows him to run quickly. The satyrs are a generic figure. They are the musicians that accompany the procession and are recognizable by their interments and animal characteristics. Lastly, Dionysus’ symbols in this narrative are the empty wine kantharos that he carries, and the grape leaf vine in his other hand.

This Attic red figure calyx krater by the Cleophrades Painter is an exemplary piece of its time period. The subject matter and artistry is characteristic of the early 5th century BCE and could have belonged to a wide range of households with any number of functions.[6]Despite some exterior damage, this calyx krater is almost completely intact and represents the artistic style and beauty of its time, along with popular subject matter. The Greeks use of symbolic pictorial language allows the viewer even today to identify mythological characters without explanation.

Image from the Louvre