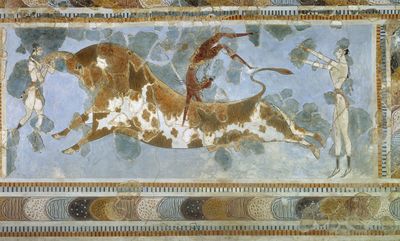 The Bull-Leaping Fresco is a distinguishable work significant to Minoan culture by its vivid colors and curvilinear shapes that bring a liveliness and vitality to the scenes. The artists of this period are skilled in reproducing natural forms in a vivid and impressionistic manner, and have the ability to fit the painting in a frame of geometric shapes.[1] In this painting there are three figures, two with a lighter skin tone standing on the outside of the frame, flanking the charging bull in the middle. On top of the bull is a figure of darker skin performing a leap over his arching back. The fresco is bordered by what appears to be the wheels of a chariot, which places them in the later years of Minoan culture after the Mycenaean takeover of Knossos and the general destruction of other Minoan centers.[2]

The act of bull-leaping is very significant to Minoan culture for it gives expression to a tension that underlies man’s somewhat tenuous mastery of nature. This is reaffirmed each time human triumphs over animal.[3] The new fascination with bull-leaping ceremonies and man vs. nature coincides with their flourishing society and provides an affirmation of social order. There is a multitude of art throughout time that was created as symbolic re-enactments of this early process of domestication of the wild, and the bull was a common subject, especially for Minoan art. Therefore, The Bull-Leaping Fresco in the Palace of Knossos is a prime example of this aspect of Minoan culture.

This particular painting has created a significant amount of debate over the identities and genders of the three figures in regards to their skin tone. When first discovered, Sir Arthur Evans made the assumption that the lighter skin of two of the figures indicated that they were female, and the darker skin meant male. He said the fresco depicts a ‘male performer, of the usual ruddy hue, who is turning a back-somersault above the bull…two female taureadors [are] distinguished not only by their white skin but by their more ornamental attire’: a reference to the variegated hue of the kilts worn by the white figures in contrast to the plain yellow worn by the reddish figure.”[4] However, archeologists have not really thought to contradict this statement, continuously believing that the color of their skin determined their gender. Yet, what if this needs to be reexamined? One other possibility could be that the color of the bull leapers was used to indicate a temporal sequence of steps in the representation of the individual carrying out the leap. Therefore the lighter figure on the left seizing the horns is preparing to begin their somersault over the galloping bull, the action indicated by the darker skin. The finishing of the leap and the now static pose is shown by the figure on the right with the lighter skin tone. Because of this observation, it is possible that this is the action of only one figure, one of extreme athletic capabilities, which can be seen with his realistic musculature; and of high social rank, because of the elaborate hairstyle, which is adorned with ribbons and other decoration. Regardless, there are many possibilities for the identity of the leaping figure, but they all represent the ceremonial action of bull-leaping and its importance within Minoan culture.