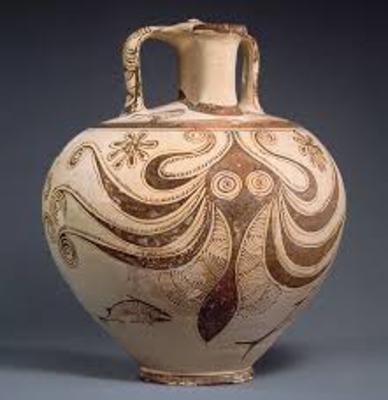 On the face of this Late Helladic Mycenaean (ca. 1200-1100 B.C.) vessel is a large, wide-eyed octopus stretching its tentacles across the vase’s bulging sides, as if attempting to connect itself on the other side. The spiraling ends of its outreaching tentacles lure the viewer around the sides to another, similar octopus that decorates the back of the jar. The octopus is highly decorated with a series of patterns covering a significant part of the surface with spirals, sea-flowers, dots, and circles. The pattern is drawn in a brilliant shade of red against a white background, adding a definite luster to the image. The geometric lines around the tentacles and concentric rings for its eyes bring life to the animal, which swims in the Aegean Sea with the other sea creatures featured on the vase. Along with the sea-life, the artist also paints imitations of striped and mottled stones, making this scene as complete as possible. The potentiality of this style, which is known as Marine Style, is fully realized: the decorative motives are organized into radiating and revolving schemes, throbbing with life.[1]

This type of vessel takes its name from the stirrup-shaped handles at the top and the configuration of the spout. In antiquity, such jars—easy to carry and stow, and designed not to spill—were commonly used to transport wine and oil throughout the Mediterranean.[2] These jars were made in a wide range of sizes, perhaps smaller ones held perfumed oils for it’s owner.

Although this vessel is a product of the Mycenaean culture of mainland Greece, its marine imagery derives from the art of Minoan Crete. When the Mycenaeans conquered Crete around 1450 B.C.E., Minoan styles exerted considerable influence on the art of the mainland. The design on this vase is ultimately derived from motifs that decorated marine-style vessels of the Late Minoan period.[3]

Control of the sea was essential to the Mycenaeans for gaining and maintaining power over their vast domain. They did not have a central, consolidated power, but relied immensely on their military strength and their ability to control and defend the sea that surrounds them. The shape of this stirrup jar and its dynamic octopus decoration testifies to the importance of the sea as an avenue of communication and source of food and wealth. It is even possible that this jar was designed for the exportation of the oil from the region to surrounding cultures. It is a celebration of Mycenae and their maritime prowess and enjoyment of the sea and the life it gives.

The Metropolitan Museum of Art. In Heilbrunn Timeline of Art History. "Stirrup jar with