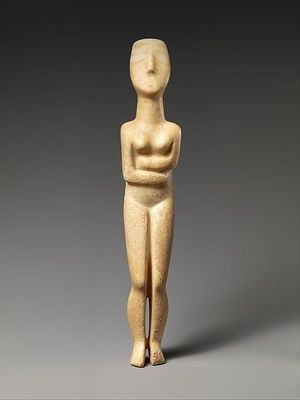 Marble Female Figure is an example of the Spedos style of figure from Early Cycladic art. Her left arm is crossed over her right, her oval face tilts back and up, there is a sense of elongation of her body, and she is significantly less angular than the other main variety, the Khalandriani figures.1 This figure in particular is much more rounded than even other Spedos style figures, such as 4. Marble Female Figure, and has a greater sense of 3D volume. The curves of her body are naturalistic and less abstracted. The viewer can look at her and, even despite the lack of facial features, get the sense of staring at another human being. This evokes a much more emotional response to the piece, especially when considering the crossed arms gesture. The way she stands with her knees slightly bent, buttocks tilted back, shoulders tilted forward, arms crossed, and head tilted up all speaks to an emotional reaction of pain or sorrow. She seems to convey this message to a much greater extent than many of the other Cycladic figures. The viewer can start to feel real empathy for her which begins to create an interactive narrative between the viewer and the piece.

All of this begins to circle back to what the piece’s purpose or function might have been in Cycladic society. Is the sense of emotion in the piece a factor in that or merely a modern reading of her? This figure was believed to have been found with a marble bowl and fragment of a terracotta offering vessel.2 This possibly points to a votive function of the piece or perhaps use in some sort of religious ritual. With little other information to go on based off of location found, and a variety of theories for Cycladic figures purpose as a category of work, it is impossible to make a firm conclusion.

This is not the only information we can gain from this piece though which might prove helpful in terms of gaining a better understanding of the function of this piece and the function of the figures as a whole. We view these statues today as clean pieces of marble with beautiful simplified lines, all very much in tune with a modern taste in art. However, many of these works were painted and as is true of this piece. With careful visual analysis, made possible by technology, it was discovered that this particular figure had two painted eyes, simple lines describing the shape with a dot for the pupil, various dot designs along the neck and on the face, as well as a paint ghost on the pubic triangle which the naked eye can only see as a smoother marble surface.3 Although this information alone is also rather inconclusive by itself, when put together with where the piece was found and straightforward visual analysis of the piece it can help to begin to paint a more detailed picture of the function and purpose of the work.