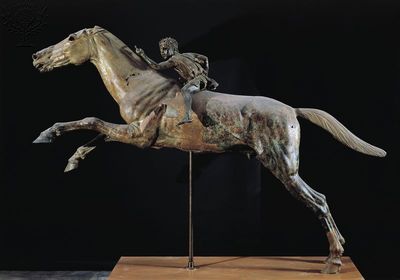 In the fall of 1928, the fragmentary bronze statues of a horse, a boy, and a god were retrieved from a sunken ship near Cape Artemision.[1] After much study and restoration, the horse and boy were paired together as a single sculptural group. The features of the horse and rider, and all of the study and debate that surrounds them, make a wonderful study of Hellenistic bronze and where it is similar to and different from Classical Greek statuary.

The pair is captured in a moment of high drama. The horse has two legs lifted far off the ground, giving the impression that he gallops at full speed. His wide eyes, flattened ears, and exaggerated veins vividly show his strain. His wide nostrils, parted mouth, and lolling tongue almost enable the viewer to see him panting and frothing as he pushes through to the end of the race. The boy sits astride his horse, his body leaning close to the animal’s neck to counterbalance the horse’s bounding gait. In one hand he grips a fragment of the preexisting reins while the other hand is poised to hold a whip or crop. The drapery of his simple clothing and the locks of his hair flutter freely in the wind. His mouth hangs slack and open, showing his exhaustion to match that of the horse. Here, the bronze acts as a very expressive medium. The metallic sheen of his skin and the hide of the horse give off the appearance of glistening sweat. The boy’s full lips and broad nose are taken by many scholars to be an indication of Ethiopian descent.[2]

The dating of the Horse and Jockey is a subject of lively debate among art historians and archaeologists. While most scholars now agree that the galloping racehorse and the small boy belong together, many still argue over whether they were created in the same era.[3] In his book, The Horse and Jockey from Artemision, Sean Hemingway devotes a great deal of time to the survey of these different theories. Many agree that the face of the horse, as well as the balance and symmetry of its pose, reflect Classical sensibilities, specifically as seen in relief sculptures of horses (i.e. the frieze at the Parthenon).[4] Others, however, quickly point out the strained veins and folds of skin on the horse as well as the small tufts of fur on its ankles show a Hellenistic tendency to dramatic expression and decorative detail.[5] The boy is more consistently seen as a Hellenistic contribution. This is due to the attention given to the boy’s racial identity as well as the expressive drapery peeling back in the wind and the exertion and exhaustion shown in his face.[6] Those who believe the group is partially a pastiche further complicate the discussion.[7] A pastiche is a work that consciously mimics another era.[8]

Regardless of whose theories are correct, this horse and his boy showcase a paradigm often seen in Hellenistic sculpture—the combination of Greek Classical ideals with added expression, drama, and energy.

Hemingway, Sean. The Horse and Jockey from Artemision: A Bronze Equestrian Monument of the Hellenistic Period. Berkeley: University of California Press, 2004.

[1] Sean Hemingway, The Horse and Jockey from Artemision: A Bronze Equestrian Monument of the Hellenistic Period (Berkeley: University of California Press, 2004), 35, 39-40.

[3] Hemingway, The Horse and Jockey from Artemision, 83.

[5] Hemingway, The Horse and Jockey from Artemision, 87.