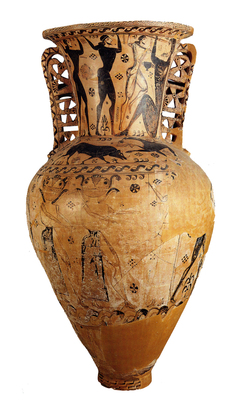 The Eleusis Neck-Amphora is a prime example of Protoattic Oriental period Greek pottery. Though the large 650 BCE black and white figure vessel is greatly damaged, the visible narratives show us an important development in style.

Fired in red clay the surface features figures in silhouette and outline form. This would have demanded great attention to detail and several layers of glaze. Exemplary of the Oriental period, all available surface space is filled in with rosettes that explain oriental integration into Greek art.

Aesthetic intent is also executed in the two characteristic fretwork handles running along the sides from rim to shoulder featuring cut-out geometric triangles and rectangles.

The overall craftsmanship of the Eleusis Neck-Amphora is crude in technique that can be seen in the rough cut-out in fretwork and uneven shaping of the vessels body. However, even though amphorae of this period were known for their oriental ornament designs they had many functions that make them a unique example of Protoattic Greek pottery.

Most interesting about the Eleusis Neck-Amphora is its function as a funerary vessel. Various types of amphorae were produced at this time and had many uses. This type in particular was meant for holding olives, wine, honey and grains.

But in many cases amphorae were used as grave markers. Having a vessel or statue as a grave maker allowed a show of wealth and statues for the family. There was often a hole at the bottom for libation offerings to the deceased.

Amphorae could also be buried holding cremated remains. In the Eleusis Neck-Amphora’s case it was used as a coffin with the skeleton of a small child found inside.

Clearly this Protoattic vessel was not for status confirmation. It was, however, commissioned by the boy’s family and was signed by the artist. He writes “Menaleus made me” on the vase.

The function of this Protoattic vase doesn’t seem to be correlated to the multiple narrations on its surface. On the surface of the vessel three separate mythological narrative registers are identifiable. Around the body, using the most space the decapitated Medusa following her two gorgon sisters chase after Perseus the hero.

Athena puts herself between the gorgons and Perseus for his protection. He is black silhouette while the gorgons are in outline and snake detail around their heads. A less intricate narrative is on the shoulder of the amphora where a lion and boar posture, ready to fight one another. The most advanced narrative covers one side of the neck and attempts to depict a past and present events. Told is the story of Odysseus the hero and Polyphemos the giant Cyclopes. In the Eleusis Neck-Amphora narrative Polyphemos sits on the ground holding a kantharos, he is already drunk as Odysseus dynamically leaps through the air stabbing the stake into the one-eyed giant. Though Polyphemos is much larger the artist fits him into the space by putting him on the ground. We also know the hero will prevail because of his slight height over the enemy. Odysseus is singled out by his outlined figure opposed to the others in silhouette.

There is much evidence of Greek burial practices and that surrounding amphorae. Though they were mostly a statue symbol this amphora was used as a coffin and buried. This poses the question, what is the significance of the narratives? Perhaps these anecdotal myths are protective embellishments or maybe they serve to comfort the child’s spirit as he passes on.