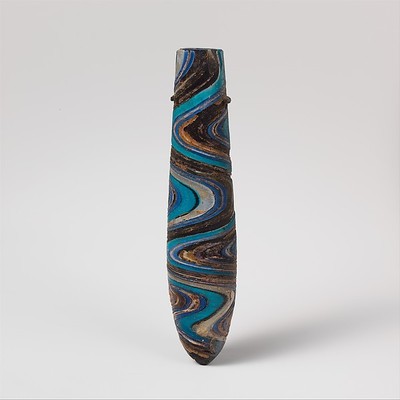 Dulling of the glass, tarnishing, and slight chipping

This very small, hollow glass vessel is a beautiful example of the extreme craftsmanship of the Greeks during the Hellenistic period. This elliptical perfume bottle is adorned with a beautifully polychrome meandering pattern of stripes. Standing just under four inches tall, it is a very intricate object, begging to be closely observed.

The bottle would have been created from a larger cane of glass that would have been preformed with layers corresponding to the colors visible in the final product (turquoise, cobalt, white, and purple). This larger piece of glass would be heated until it was soft enough to be easily worked and then subsequently pulled and stretched over a metal rod (which would also be heated), giving the bottle its shape. The placement of the rod into the original piece of glass, as well as any manipulations the artisan may have made to the glass’ position would have contributed to the meandering bands of color. The final step in the creation was to, once the whole bottle had cooled, apply extremely thin sheets of delicate hammered gold to one of the bands, with an additional layer of glass being applied overtop, sandwiching and locking the gold in place.

The Greeks were known for their large mosaic work, and the same glassmaking prowess from the mosaics is undoubtedly evident in this small perfume bottle. The intricacy of the decoration would require the utmost skill—something the Greeks definitely possessed. The perfect curve of the silhouette and the condition of the different bands of color speak to this prowess, as well. This bottle also comes out of a long tradition of Greek alabastra. The alabastra were a class of small vessels—usually glass, but sometimes ceramic—made specifically with the intent of holding oils for massage or perfume.The name is derived from the Egyptians who made similar vessels carved of alabaster during the New Kingdom period.