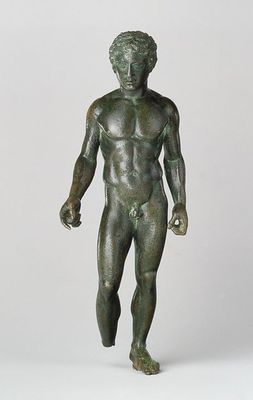 The Metropolitan Museum of Art

Artists for centuries have looked back to the works of Ancient Greece as the high point of human artistic creation. The Romans adored the Greeks—at least artistically speaking—giving us most of the “Greek” statuary we have today.Renaissance artists rediscovered the arts of antiquity, and ever since, art has always harkened back to Classical Ancient Greece.The perfect calmness in expression and pose, the beautifully idealized bodies and faces, and the virtuosity with which these sculptures were created all combine to make Classical Greek art truly timeless. The Greek depiction of the human body seems more real, more perfect, and more human than to actually observe the human body

Standing at just over 6 inches in height, the Bronze Youth is seen standing in a relaxed, weight-leg-free-leg stance—just slightly removed from true contrapposto. There are very few surprises to be had here, the Greek artist lets you take in the work at face value. His arms are spread slightly—raised up from his sides, with both hands curled as if they may have once held something. The musculature of the torso is extremely defined, more than the usual slender, fit build that the Greeks were known for.

Bronze Youth is a peculiar example of Classical Greek statuary. Firstly, he is a bronze original. Bronze is a very expensive metal, and since these were sculpted so long ago, there have been too many opportunities to melt them down—many of which that have been taken. Because of this, we are left with very few original bronze sculptures by the Greeks. This little man, though, was spared. Secondly, he has a very large head. The Greeks were very into the mathematics behind proper proportions. Polykleitos, one of the most celebrated Ancient Greek sculptors, wrote a book called the Canon. This book enumerated the things necessary to have perfect human proportions. Based in math, everything is based on symmetria and other various measuring means. The hair on Bronze Youth is also strange. The Greeks, being very proud in their identity as a civilized people, liked to immortalize this identity by making sure Greeks were depicted as perfectly as possible. Hair as unkempt as Bronze Youth’s could not have been Greek.

Exemplifying the style of his times, but still retaining a few key peculiarities, the status Bronze Youth just begs to be observed.