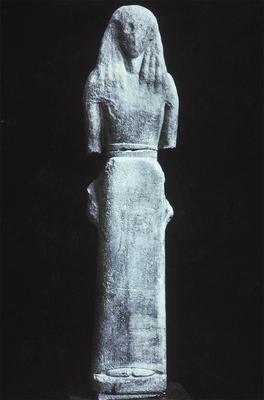 The Kore from Delos is an example of a type of kouros or kore sculpture popular during the Geometric, Orientalizing, and Archaic periods of Greek art. A kore statue is the female version of a kouros statue, kouros meaning youth. These statues were used as grave markers and typically stood at roughly life sized. This particular kore is stylistically characteristic of the time, fitting within the canon. The figure is clearly carved from a rectangular block and the self contained form and composition of the body are closely controlled by this. This can be seen in the arms straight down by the side, the columnar legs, and upright stance. These verticals are accented by the pronounced horizontals at the shoulders, waist, and base which links the piece back to the previous period, Geometric Greece.The frontal and frozen pose with triangular face and highly stylized and artificial hair are other stylistic features which help to mark it from this period of Greek art.Later pieces will begin to show more of a focus on movement and naturalism with a keen observation of body composition and how movement affects the body.

Despite the damage to her arms and general wear on her face and hands, identification of this piece is made easier by an inscription on the side of her skirt which reads: “Nikandre dedicated me to the Far Darter, the Arrow Shooter, outstanding of women, daughter of Deinodikes of Naxos, sister of Deinomenes, wife of Phraxos.” This states Nikandre as the person the statue was created for but leaves in question who the statue might be depicting. The statue was found near the Temple of Artemis and so it could represent Nikandre as a type of votive offering to the goddess Artemis or a generic figure to fill that same votive role, yet it could even have been a depiction of Artemis herself. This also begins to call into question the function of the piece. Is it truly a kore, a gravemarker figure, or was it meant as a votive statue and named a kore before its true function was discovered. The inscription leaves this up for some debate. Something interesting to note though is the focus on the male family members as a way of identifying Nikandre. This both places an attention on family as well as the patriarchal nature of the society. If the statue is a depiction of Nikandre herself then the inclusion of these names seems more fitting and seems to point away from the reading of the figure as a generic votive figure. No matter who is actually being depicted, these men listed would have had significantly more control in the creation of the statue than Nikandre.