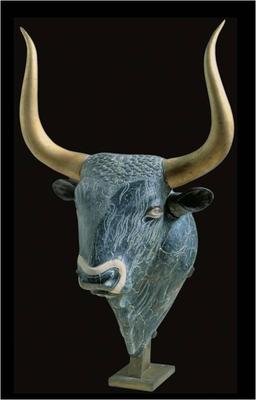 The Bull’s Head Rhyton, 12” from the Little Palace at Knossos, dated 1450-1400 BCE, is nothing but spectacular. Even though this is one of the most famous finds from Sir Arthur Evan’s excavations of Crete in 1900, there is still some varied theories on its use and meaning.[1] Naturalism and attention to detail is exemplified in this almost individualized portrait bust of a bull. The naturalism of the Bull’s Head Rhyton can be observed in the curvature of the nose, the projecting rounded ears, and the fat deposit hanging from the bottom of the bull’s neck. Atop the bulls head are stylized curly tufts of hair and also carved into the stone are forelock designs and dapples on the neck. Due to the bull’s coloring and physical attributes, as well as the lyre shaped horns, it is probably modeled after a Greek steppe breed of cattle that still inhabits northern Greece.[2]

This rhyton boasts the most exquisite materials. The main vessel is made of steatite stone while the muzzle has white inlaid shell, and the eyes are made of rock crystal and red jasper. The horns are wooden with gold leafing and have since been reconstructed. Crafted deliberately the eyes are rock crystal painted on the back side with red pupils and black irises, then set into red jasper for a dramatic blood shot look and inlayed into the steatite.[3]

A rhyton is a libation offering vessel, the bull head in particular would have been used in religious ritual, banquet and festival settings. Libations of wine, water, oil, milk, or honey were used to worship a god or honor the dead. The libation would have been poured through the neck and spouted through the bull’s mouth and into the earth. Remains of the libation would often be drank from the bull’s mouth by the worshipper. It has recently been suggested that bull’s head rhyta were used in blood sacrifice libations, and that the rhyton is a portrait of the sacrificed bull.[4] The bull would be sacrificed and its meat distributed to the ritual attendees and the blood would be drained. The rhyton would be made to individually represent the sacrificed bull in his honor. The blood would then be poured through the portrait rhyton and into the ground as thanks. The later disposal of the bull head rhyton would be representative of a second killing. Disposing of the portrait rhyton was a part of the ritual where its destruction was a second sacrifice of the original living bull.

Though the libation type and representation of the Bull’s Head Rhyton has yet to be completely uncovered it does not take away from the cultural information this rhyton tells us about the Minoan people. The Minoan culture known for their bull leaping held the bull in high regard, using the bull to symbolically assert man’s dominance over the chaos of nature.[5] This particular bull’s head rhyton is the finest and most complete example of ritual vessels from this period.[6] It can be used in comparison with other Minoan bull iconography to understand the master craftsmanship of the piece and the naturalistic style it portrays. An abundance of precious stones were used, explaining the importance of the bull as well as the Minoan’s access to valuable material. The Bull’s Head Rhyton is famous for its beauty and inherent artistry described in the essence of naturalism and working of material, as well as attention to detail in individualism bringing regality to the Minoan bull.

[2] McInerney, Bulls and Bull-Leaping in the Minoan World.

[4] McInerney, Bulls and Bull-Leaping in the Minoan World.

[5] McInerney, Bulls and Bull-Leaping in the Minoan World.