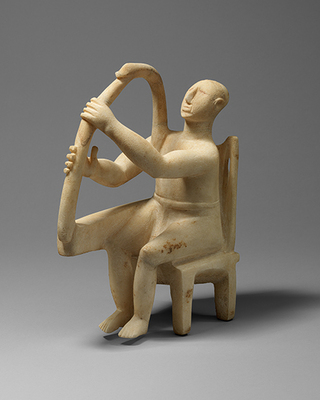 Slight discolorations on legs, loss of paint that once adorned the head

This sculpture, featuring a harpist, is one of the first depictions of a musician that there is. Seated Harp Player is a relatively small sculpture, made out of marble. It depicts a man, seated on a chair with a detailed back, playing a large harp. The face is nondescript, except for a nose, a brow ridge, large hollow ears, and lips that seem to suggest singing. The hands, both high-up on the harp, hold the large instrument firmly against the figure’s thigh and side, tucked under the right arm. The small head stands in stark contrast to the figure’s very bulky arms and wide midsection, which tapers down into very slender ankles and feet. Pigment analysis also shows that the back of the head would have been painted.

Marble is a very hard stone, and it would have been extremely difficult for ancient peoples to carve. Most people think that these figures would have been carved with other harder stones.Emery would have been used for most of the carving. It could be fashioned into a chisel or a drill, be used to polish the surface, or be used to incise lines into the surface. Obsidian and flint would have also been used, because these stronger stones can be made into very sharp edges, which would have been very useful to the prehistoric sculptor. The stone, was also polished to a very high level of shine, which is something difficult for even modern sculptors to accomplish. This would have been done by finally rubbing the sculpture with pumice stones.

The process alone indicates that these figures did serve some purpose. What, exactly, that purpose was, we can only theorize. The work and time intensive process seems to point that these figures were definitely valued. One of the biggest theories is that they were created in memory of the deceased.The standardized nature of the figures—that is they all look generally the same—seems to say that there was a common symbolism in this type of form. Many scholars have theorized this common symbolism correlates to religious function, but with the lack of written texts and very little archaeological material, we just do not know the function.