Bronze Group of a Bull and Acrobat 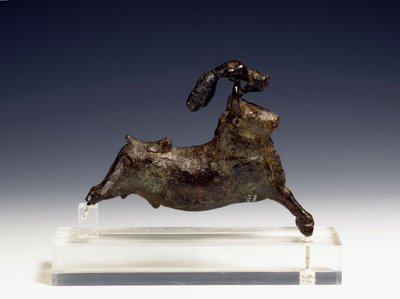 The Minoan Bull Leaper, or Bronze Group of a Bull and Acrobat, is a small representation of a Minoan ritualistic activity. Bull-leaping is a frequently shown and dangerous act that has been represented in different mediums in Minoan art.In this particular sculpture, the acrobat is shown somersaulting over the back of the bull and landing with both feet on its back. This is known to be the most dangerous and impossible of the various bull-leaping methods.

The overall composition is shockingly dynamic and fluid. The acrobat, in an unusual position, is juxtaposed with the powerful bull in mid air. The acrobat and bull appear to be connected at the head with the acrobat’s hair skimming the bull’s horns. While somersaulting over the bull’s head, he is crouched, upside down, and almost unidentifiable. The bull is spread out into a flying gallop pose, common of Minoan bull painting and sculpture.

Because Minoan bronze was typically poor in tin, the surface is bubbly and flawed.The broken legs of the bull and the leaper, a possible result of the casting technique, add to its fragmented condition.

It is possible that the bull is being honored in this sculpture because it is the more prominent and idealized figure of the two. The bull, in Minoan culture, was seen as a sacred animal. This is evident in the idealized pose and expression that creates a powerful and authoritative image. This potential votive figure is quite different than those seen in other cultures. While most ritualistic statues are of human figures standing or sitting in a reflective pose, this statue reflects an action of an animal. The effect of this dynamic action is mystical - performing an act which seems to be impossible, and therefore suited for ritualistic purposes. Bull-leaping sculptures, like this one, were used in shrines or sanctuaries.It is possible that this seemingly impossible act was made easier by restraining the bull in real life, but without that image in this sculpture, the bull and acrobat appear to be flying through an undefined space.This representation of the bull is frequent - especially in the Minoan Palace of Knossos. Because this activity has a ritualistic and spiritual meaning, it is possible that this sculpture was produced for a palatial purpose.

The bronze was clearly crafted by a skilled sculptor, not for a common, household item. Because of other bull representations associated with Knossos, this small sculpture could have been associated with rituals held in the palace. While this particular sculpture is unique in stylization, it belongs in a vast category of objects made by civilizations that wanted to worship what they believed to be sacred to their lifestyles.