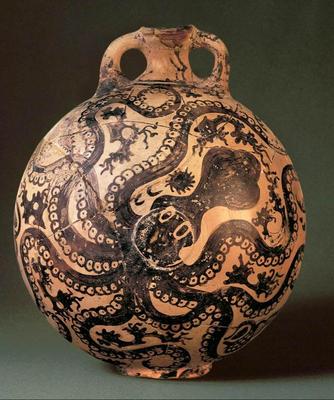 The Octopus Flask is an example of Minoan New Palace Period pottery. Made to celebrate the sea, this Kamares Ware jug is covered in decoration of marine life.The jug is round with a small opening at the top and has two small, round handles on either side of the neck. The main figure is an octopus whose tentacles span over the rounded surface of the vase. There is not much attention to realism in this representation, and the figure is almost cartoon-like. The most unrealistic features are the figure’s bulging, round eyes, and the inclusion of all of its suckers, which would not be visible on all tentacles in a realistic perspective; However, these round motif features mimic the shape of the vase as well as the round handles at the neck. The overall appearance of the octopus is fluid and dynamic as it wraps around the surface.

The space around the main figures is filled with other sea objects - coral, seaweed, and shells. These objects are usually placed without much interest in composition or symmetry. While there is not a specific narrative, it is clear that the overall meaning is a representation of a love for the sea.This subject matter on vases is called of “Marine Style” pottery.The marine style is shown in the design of the subject as well as the overall structure of the jug.

The round body of the jug represents the head of an octopus, and the two rounded handles are a simplified version of tentacles. This is what art historians call “Anthropomorphic”, meaning the object itself is a representation of the subject. Here, the handles are made to represent the subject of the octopus. This is important because, when used, this style gives historians insight into what the culture valued. In this case, as shown with the abundance of marine subjects in other media, it is evident that the Minoan culture valued marine life. This also supports evidence that the Minoan economy depended on the sea.

Over time, the paint has become muted, but it is clear that there is a shift in style of Minoan pottery and ceramics. In Old Palace style, pottery showed light figures on a dark background, for the most part.Here, dark figures are shown on a light background. This shift would be important in Greek pottery, and this dark on light technique would be the norm for Greek pottery until about 530 BCE.The effect of this style is a greater attention to detail, like the suckers on the octopus, which would be less prominent on a dark background. Across various ancient cultures, artists portrayed what they saw in everyday life and what was important to them, and this is very much true for Minoan art and pottery.