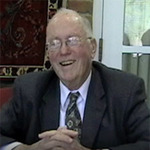 Video interview with Dr. Charles Townes, Nobel Prize winning American physicist, and inventor of the maser and laser. Dr. Townes graduated Furman in 1935. He begins his interview talking about what he considers to be his greatest accomplishments, what inspires him, and how he would like to be remembered. Dr. Townes speaks of his childhood in Greenville, SC, and his interest in science as a boy. He explains how it was at Furman that he decided to study Physics. He mentions Physics Professor Hiden Cox as one of his favorite Furman professors. Dr. Townes briefly speaks of life during the Great Depression. He talks of going to the California Institute of Technology, taking classes under Oppenheimer, and later working with Bell Labs during World War II on radar bombing systems. Dr. Townes talks in detail about his work with NASA during the Space Race, and the first landing on the moon. He speaks of the Cold War, and his time advising President Reagan on the MX Missle. Dr. Townes shares memories of Furman, studying science, modern languages, the band, and swimming. He briefly talks about what he is involved in at the time of this interview, traveling to Pakistan and Germany, meeting with other scientists. Dr. Townes finishes the interview discussing his thoughts on faith, religion, and science, and the relation between them.