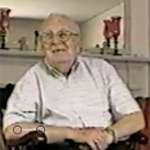 Video interview with Dr. Eugene Proctor. Dr. Proctor attended Furman in the late 1930's, served as a Furman Trustee for 25 years, and served as Chairman of the Board for 6 of those. Dr. Proctor begins the interview talking about the inauguration of President Gordon Blackwell, as well as his close friendship with Dr. Blackwell. He reflects on his time as a Furman student, student life in the late 1930's, and President Geer's time as President. Dr. Proctor speaks about his time as a Furman Trustee, and issues such as on-campus dances, fraternities, desegregation, the Ford Foundation grant, and building the science building. He remembers Dean Robert Daniel, Professors Sumner Ives, and John Sampey. He talks about working with Herman Lay, Alester Furman Sr., and Alester Furman, Jr., the hiring of Dr. Gordon Blackwell as President, as well as what it was like working closley with President John Plyler. Dr. Proctor shares anecdotes of Dr. and Mrs. Gordon Blackwell, as he was very close, personal friends with both. He speaks of Dr. Blackwell's legacy, and closes the interview speaking of the arrival of Dr. John Johns, what Dr. John's was like as president of the university, and the differences between Dr. Johns and Dr. Blackwell.