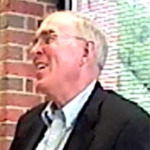 Video interview with John Plyler, Jr., son of John L. Plyler, former president of Furman University. Mr. Plyler begins the interview talking about the president's home, and growing up there, on the old Furman campus in downtown Greenville, SC. He remembers his parents' two month European tour which inspired many parts of Furman's new campus. Mr. Plyler highlights a number of Furman faculty that he remembers, and shares memories of the old Furman campus, and his father. Mr. Plyler speaks of the effects World War II had on Furman, and Furman's relation to Greenville during his father's presidency. He gives details about successful Furman alumni over the years. Mr. Plyler also details the planning of Furman's current campus, the use of the land before the current campus was built, and concludes the interview talking about the science building, Plyler Hall, it's construction and naming.