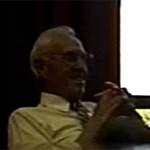 Video interview with Tom Hartness, Furman Trustee Emeritus. Mr. Hartness served on the board of trustees at Furman for over forty years, including several terms as chair. Furman awarded him an honorary Doctor of Laws degree in 1972. Mr. Hartness begins this 2004 interview telling about his background, how he came to Greenville, SC, and started his business. He tells how he became interested in Furman through his friendship with Furman Coach Lyles Alley. He remembers President Plyler asking him to serve on the board, the groundbreaking of the new Furman campus, and discusses the relationship between Greenville and Furman right after Furman's move from downtown. Mr. Hartness speaks about President Plyler, Alester Furman, and Dean Cain during those years, and tells of money raising campaigns in the early years of the new campus. He praises Bea Plyler for her involvement in the development of the new campus, as well as Dr. Frank Bonner for his work for Furman. Mr. Hartness discusses his time on the search committee for President Blackwell and President Johns, and shares anecdotes about Dr. John's hiring and from his long friendship with Dr. Johns. He concludes the interview talking about Furman's split with the SC Southern Baptist Convention, the accomplishments of President Johns, and the change in Furman since the 50's.