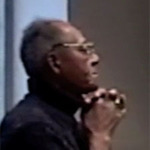 Video interview with DeWitt Jackson, World War II hero, winner of two Bronze Stars, and a Purple Heart. DeWitt Jackson was born in Fountain Inn, SC, in 1920, and in this interview Mr. Jackson speaks of his life, growing up as a child of a sharecropper in the 1920's and 1930's, and the difficulties he faced as a young African American getting an education. He talks about attenting the historic Bettis Academy and Junior College in Edgefield, SC. Mr. Jackson discusses going into the service, his training, being a rifleman in the 371st Infantry Regiment of the 92nd Division, and fighting in Italy during World War II. He tells how he was injured. Mr. Jackson proceeds to talk about returning from war, and the difficulties of coming home and facing racism and segregation in the 1940's. After living in Indiana for many years, Mr. Jackson gives details of returning to upstate SC and starting a job as a cook at Furman University in the early 1970's. He reflects on his time working at Furman. He mentions Furman basketball player, Clyde Mayes. Mr. Jackson talks about the changes in the South throughout his life, and he compares life in Indiana to life in Greenville, SC. He finishes his interview with stories of his mother being a midwife in the 1920's and 30's.