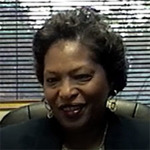 Video interview with Lillian Brock Fleming, one of the first two African American females to graduate Furman University. Lillian enrolled at Furman in 1967 as one of the university’s first African American women. She graduated in 1971, and earned her Masters of Education from Furman in 1975. In 1981, she became the first African-American woman to serve on the Greenville City Council, and in 1989 she was elected Mayor Pro Tempore. In 1995, she became Furman’s first female African-American trustee, and in 2014 Lillian was awarded an Honorary Doctor of Humanities degree from Furman University. Mrs. Fleming begins the interview talking about growing up in Greenville SC, and what led her to attend Furman. She shares memories of the 1960’s and the civil rights movement, integration, and her life as an African American student at Furman during those years. Lillian remembers Ernie Harrill, L. D. Johnson, and talks about President Gordon Blackwell and his relationship with the Furman students. She shares stories about her good friend, Joe Vaughn, growing up with Joe in the same neighborhood, attending Furman together, as well as life after Furman, working in education in Greenville County. Mrs. Fleming talks about her appreciation for Furman, and how she sees Furman now, and the direction the school is taking. She also speaks about being on the Furman Board of Trustees, the issues they faced, and their goals. Lillian closes the interview speaking about her continued relationship with Furman.

Copyright Furman University. Materials are intended for non-commercial, educational, and personal use only, and are not to be reproduced or distributed without written permission. In compliance with fair use, whenever items are used for personal use, research, or teaching, please credit as follows: 'Furman University, Special Collections and Archives'.