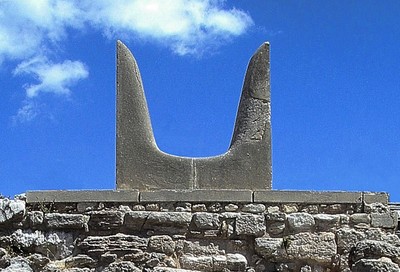 Ancient cultures throughout recognized the physical power of the bull and venerated the bull as a creature of the cosmos. The Minoan people of Crete, 2000 – 1450 BCE, emphasized bull veneration in their spiritual practices. Minoans found logic in their natural world and felt humans and the environment were in harmony. [1] Living in a turbulent geographical area, ritual practices incorporating the chaos of the universe and man’s ability to overcome the natural environment were common place.[2] They expressed their relationship and worship of nature and natural elements through craft and art. Through Greek myth and archaeology, art has reconstructed and help guided our understanding of the Minoan culture. The evidence of such studies describe that Minoans saw the bull as a physical representation of an earth deity. Through looking at the myth of the Minotaur, ritual surrounding the bull, art featuring the bull, and analyzing similar iconography of other cultures, the Minoan deification of the bull is undeniable.

The existence of King Minos and the myth of the Minotaur is debated but proves a long reaching connection to the bull in Minoan history. King Minos of Crete feared the dwindling power of his empire and hence asked Poseidon for a bull to sacrifice.[3] When a white bull emerged for the sea it was so handsome that Minos decided to keep it. Poseidon did not approve and cursed Pasiphae, Minos wife, to fall in love with the bull. The Minotaur, half beast, half man became the product of their consummation. Minos locked the beastly Minotaur in the labyrinth, and it was later killed by the hero Theseus. This myth demonstrates the awe and attraction the Minoans had to the white bull, its ephemeral beauty and power. This bull, delivered by Poseidon was clearly other worldly. In the majority of Greek myths, other than humans, gods almost exclusively impregnate humans. Does this impregnation of Pasiphae by the bull suggest the bull is a god? This would explain the abundance of bull iconography in Minoan art and the importance of the Minotaur myth to the culture.

Historically, bull leaping is what the Minoans are known for. This ritual tradition has been found in other cultures but originated on Crete. Today bull leaping is alive in Spain, however, differs from Minoan depictions. The Greek word for bull leaping is "taurokatharpsia", it was an essential part of religious festival games involving skill and agility.[4] It’s possible that bull leaping was held in the central court of the palace, or nearby due to the proximity of a bull leaping fresco on a wall within the palace.[5]> Origins of the practice could be in symbolically representing early hunting actions and domestication of the wild bull as a show of man’s control over nature. Woman were included in this sport where their image dominates in bull leaping iconography identifiable by pale skin against male terracotta coloring. Described as a contest between human and bull, leaping was a ritual practice of superiority over chaos to establish harmony with the earth deity, the bull.

It’s unclear whether the particular style (grabbing the bull by the horns, being lifted by the force of his head toss, and somersaulting onto the bulls back) seen in iconography is even possible.[6]> A particularly beautiful early bronze demonstrates the leap in a less common, beginning stage. The Bronze Group of a Bull and Acrobat naturalistically captures the movement of a woman almost standing on the back of a charging bull.[7]> The acrobat has an arched back while her arms and lower legs are missing her body is suspended. The sculptor has artistically attached the acrobat to the bull by her hair that falls on the bull’s forehead. Grace and athleticism are portrayed in this piece, as well as the essence of a spiritual connection between the bull and acrobat. This unity explains the value the Minoans put on the harmony between humanity and nature.

Libation offerings were common practice in Crete for worship of a deity or to express devotion. Stylized stone vases or the everyday ceramic vessels were used, but on important occasions a rhyton would be utilized.[8]> Many bull-headed rhytons have been found, as well as depictions, one which appears in a tomb wall painting with an emissary carrying the vessel. A well-known example is from the Little Palace at Knossos. Beautifully crafted in a variety of precious materials the Bull’s Head Rhyton is a naturalistic study of the bull and is the finest in the Peloponnesian Peninsula of this period. [9]> Libations or wine, water, olive oil, or milk would be poured through the neck of the bull head and through its muzzle into the earth. The worshipper would drink the last remains from the rhyton’s mouth. It seemsappropriate for a ritual libation offering to an earth deity to be poured through a depiction of their physical representation, a bull’s head.

A most interesting archeological find at Knossos are the horns of consecration which can be found throughout Minoan iconography, here they are incorporated into architecture. These large limestone carved bull horns are flat on the exterior sides while the interiors are molded and curved to a point at the ends. Horns of consecration are found above important entryways, suggesting the boundary between human and divine realms.[10] Arthur Evans was the first archeological excavator on Crete at Knossos in 1900, he believed these stone structures were horns because of the Minotaur myth and the Minoan apparent fascination with the bull. Later investigation found these horns perfectly frame the mountain Juktas. Atop the peak there is a monumental sanctuary where a deep chasm was found filled with votive statues. This was believed to be the entrance to the underworld, atop Juktas, framed between the horns of consecration. The earth holds the underworld which is a passage from the human world to the divine. Hence, the importance of the horns of consecration lays not in the horns themselves but the mountain between them. [11]> The horns of consecration are the mountain, the bull is the mountain, and the bull is the earth deity.

The Minoans associated the bull with the sun and the moon. In iconography found on vessels and rhytons there is often a sun disc rising or a double axe between the horns of a bull head. In the case of the double axe over the bull head this is not a sacrificial tool but rather represents the sun rising over the mountain. [12] The idea of the bull of heaven is not entirely original. In the Assyrian culture of ancient Mesopotamia the gates to the palace compounds boasted gigantic stone carved lamassu guardian figures. They featured the muscular body of a bull with elaborate wings and the head of a human. These figures were imposing in size and held divine power with the horned headdress of the gods. Their purpose was to protect the city and ward of enemies. Parallel with the sun disc between the horns of consecration is the Egyptian goddess Hathor.[13]> Hathor is represented in animal form as a cow, she is also adorned with a red sun disc between horns in her human and cow form. Along with being the goddess of love, joy, music, and dance, she is also the goddess of motherhood, the sky, and fertility, not dissimilar to the realms of an earth deity.

In Minoans believed the bull is a creature of the cosmos, important to the sun and moon. The bull is a physical representation of an earth deity. Evidence can be found in the original Greek Minotaur myth and the infatuation with the white bull, the bull leaping games that connected man and beast spiritually, the ritual libation rhyton of worship, and lastly the horns of consecration that proved the bull in the mountain is the earth deity. Because they live in a turbulent world it was important for the Minoans to worship the earth to pacify the chaos of the universe, they believed man had the ability to overcome the natural environment through devote ritual. In the end the supremacy of man over nature did not succeed and the Minoan people succumbed to reoccurring devastation natural disasters.[14]

[3]"The Significance of the Bull in the Minoan Religion."

[6] "The Significance of the Bull in the Minoan Religion."

Conway, John. "The Significance of the Bull in the Minoan Religion." Synonym. Accessed November 20, 2015.