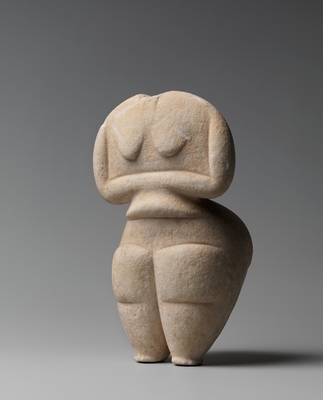 This marble figurine is from the earliest days of art production in the Cycladic Islands. She is classified as part of the steatopygous type--a voluptuous, full-bodied female figure universally accepted to have associations with fertility.[1] Though figurines of this type are more rare in Cycladic art, there are several other Neolithic-era steatopygous figures attributed to the region. These earliest Cycladic figurines show an unexpected level of mastery over the marble. This level of technical mastery is made more impressive by the attention to naturalism--to the curves and pockets created in fuller figures. This leads some scholars to argue that the techniques, concepts, or even the figures themselves were brought to the Cyclades from outside cultures.[2] While there is merit to this argument, these figures do not stand alone as a fluke in Cycladic art, but become a part of the region’s artistic identity.

The figure shown here also represents an early iteration of the crossed-arms gesture that becomes a consistent element in later Cycladic figurines. There are many proposed reasons for this distinctive pose. Nicholas Stampolidis and Peggy Sotirakopoulou list four in their book, Aegean Waves; 1) the gesture mimics a dead body about to be buried, 2) the pose is in fact a cradling position and is indicative of childbirth, 3) this is merely a practical technique of the artist to minimize potential breakage, or 4) the arms are crossed in a posture of submission and worship.[3] While all of these theories could be easily defended, I propose another interpretation. We are looking here at a figure of fertility, every curve and body part of this woman is meant to symbolize abundance and plenty. We cannot consider it as a mere coincidence, then, that the arms cover her protruding stomach. This seems to be a gesture of protection, not to shrink away and protect herself, but to calmly clasp her hands over her womb as an image of protection for future children. This interpretation makes sense if the function of the figurine is assumed to be some form of wish fulfillment or talisman.

As an object of wish fulfillment, as a physical representation of a prayer or desire, this figurine takes on an emotional quality. Every masterful and delicate line becomes representative of hours of prayerful labor. Even if the craftsman behind the object didn’t know the one who commissioned it, the level of care and attention doted on the figure shows a cultural appreciation for fertility. This small marble woman becomes a captivating look into an emerging culture, preoccupied with the fertility of their land and their people because it meant their survival. All of the value placed on these things is visible in the painstakingly smooth workmanship of this steatopygous woman.