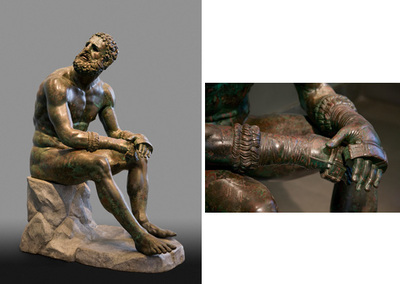 The Hellenistic period in Greek art and architecture falls around 323-31 B.C.E. It is called the Hellenistic period because this time “witnessed the dissemination of Greek and Macedonian ideas throughout what had been Alexander’s empire.”[1] With the Hellenistic period, came an increased variety in how the human experience was represented both through form and emotion.[2] The Seated Boxer is a perfect example of this. It features a struggle between the ideal hero of the High Classical style and the Hellenistic representation of human experience. The figure has a broken nose and swollen ears. The bronze inlays represent the bloody patches and swollen lips along with his swollen muscles depict the realities of the harshness of human experience. But this harsh reality is put in direct contrast with his Classically ideal and curly locks of hair.[3] Typical of many Hellenistic pieces, it looks back to the Classical style as a model. The mixture between High Classical and Hellenistic style is also evident in his position. He is seated in a Classical pose, but the twisting of the torso and neck is very characteristic of the Hellenistic style. Because of the bloody patches and swollen muscles, the boxer is shown right after a fight or match. Despite being injured, his muscles are still slightly tense as if he is about to get up again for the next round. [4] Again, this displays the harsh realities of the human experience against the Classical hero is never fully defeated, showing strength and power.

Another interesting element of this statue is the fact that he is seated at all. In some ways, this is a paradox. A boxer is an athlete and is supposed to be in action. However, the figure is seated and at rest. A typical portrayal of an athlete might be in action, but he is showing signs of human weakness with a broken nose and bloody patches. The musculature and textures are detailed and idealized but are not overly exaggerated. His expression on his face is showing emotion with a furrowed brow. This expression shows that he is in pain as well as exhausted, but not to the point of defeat. Though he is seated, the boxer looks as though he is still physically powerful, and ready to fight again. Once again, this depiction of the raw human experience is archetypal of the Hellenistic style.

Hemingway, Seán. “The Boxer: An Ancient Masterpiece Comes to the Met.”