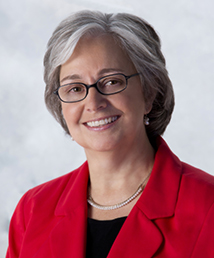 Susan Carvalho serves as Associate Provost and Dean of the Graduate School at The University of Alabama, where she oversees recruitment, admissions, financial support, new program proposals, professional development, and academic policy related to the University’s master’s and doctoral programs. She also serves as one of the 13 lead members of the Council of Graduate Schools’ Humanities Coalition, an ongoing initiative funded by the Mellon Foundation that seeks to understand and support the careers of PhD’s in the humanities. In addition to her UA role, Dean Carvalho serves as a senior advisor to the American Council on Education’s Internationalization Laboratory, which has guided the work of over 150 universities in strategic planning for international activities. In this role she has mentored universities from Colombia, Puerto Rico, Brazil, and the US. Prior to joining UA in 2016, Dean Carvalho served as interim graduate dean and as associate provost for internationalization at the University of Kentucky, where she also directed 35 dissertations to completion. She also served for six years as Director of the Middlebury College Spanish School (2003-2008), with programs in Vermont, Spain, and Mexico. Her academic home at UA is in Modern Languages & Classics, with a research focus on intersections of gender, space, and power in contemporary Latin American and Latinx narrative.

Dr. Bartlett is a long-standing member of MIFLA who is currently head of the Modern Languages and Literatures department at Furman University and holds the Carey Shepard Crantford endowed chair. During her 30 years at Furman she has held several positions in the administration, including Assistant Academic Dean (1999-2001), Associate Academic Dean (2001-2009), and Acting Vice President for Academic Affairs and Dean (2006-2007). She returned to full-time teaching in 2009.

Dr. E. Joe Johnson is a professor of both French and Spanish at Clayton State University where he has worked since 2004. He is the long-serving foreign language coordinator and has served several different administrative roles. He has recently taken a position as the Interim Assistant Dean of Arts and Sciences.

His home institution, Clayton State, is a medium-sized school of nearly 7,000 students in Morrow, GA. The institution serves a largely African-American population and many non-traditional students. Nearly 60% of the students are on Pell Grants, as of 2018.